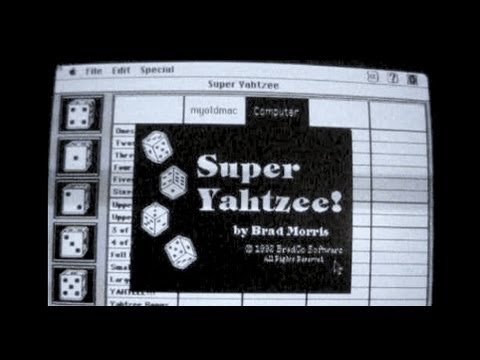 Find a vintage Macintosh at

Super Yahtzee is a computer adaptation of a classic poker dice game. The object of the game is to fill in a scorecard with hands (combinations of five dice) totaling the optimal amount of points for each section of the card.

Supported Systems:
This program has been tested on Macintosh Plus, SE, SE/30, Classic, LC, IIcx, IIci, IIfx, Quadra and PowerBook computers. Super Yahtzee requires 300 K of free RAM memory to run. It requires a monitor capable of displaying 16 colors to run in color. It requires System 6.0.5 or higher for digitized sound.

Yahtzee is a dice game made by Milton Bradley (now owned by Hasbro), which was first marketed by game entrepreneur Edwin S. Lowe in 1956. The game is a development of earlier dice games such as Yacht and Generala. A public domain version of Yahtzee, which is popular especially in Scandinavia, is Yatzy. Yahtzee is also similar to the English game of Poker Dice and the Cheerio dice game.

The scoring combinations have varying point values, some of which are fixed values and others of which have the cumulative value of the dice. A Yahtzee is five-of-a-kind and holds the game’s highest point value of 50 (not counting multiple “Yahtzees” in the same game).

Yahtzee was marketed by the E.S. Lowe company from 1956 till 1973. In 1973, the Milton Bradley Company purchased the E.S. Lowe Company and assumed the rights to produce and sell Yahtzee. During Lowe’s ownership over 40 million Yahtzee games were sold in America and around the globe. The game has maintained its popularity. According to current owner Hasbro, 50 million Yahtzee games are sold each year.